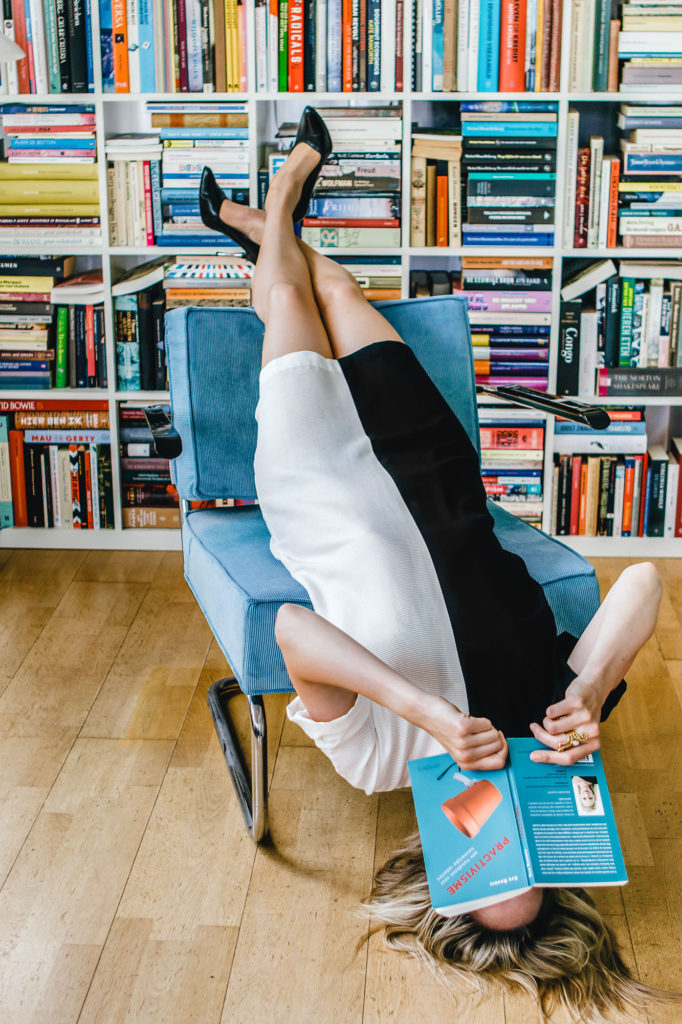 ‘Realize that you are so much more than a consumer and have so much more influence than you think. Dare to think as a human being who has a world to win ‘.

We visited Eva Rovers with regard to her book ‘Practivism, a handbook for covertly rebels‘ (original Dutch title: Practivisme, een handboek voor heimelijke rebellen). The title alone already appealed to us … because that is exactly what we stand for; practical activism, changing existing structures just by doing it! And we also love a bit of rebellion 😉

We meet her in her apartment in the heart of Amsterdam. Her tastefully decorated and sunny apartment is full of books (how could it be otherwise!), Good music and beautiful art objects. She is cheerful and has a clear personality, chooses her words carefully. Eva sparkles. Not at all like the distorted activist who is against everything, the cliché image that people often have of moralistic, all parties ruining activists. No, nothing of that! Of course, most of all she’s a writer, but one with a mission!

As a child, Eva already knew that she wanted to be a writer. ‘With language you can create an image and at the same time it is very technical, because you want to express something as clearly as possible. “I really like that puzzle. It must be logical and has to stimulate the imagination”. She wanted to make the world a bit more beautiful. When she was 9 she first revolted. That was about the seal hunt. She gave a lecture at school and took a cotton-padded Barbie doll, which she then hit with a baseball bat. With this she wanted to show her classmates how barbarous poachers work. The class kept staring at her in silence and startled. And the uprising that she had hoped for failed to happen. That day she learned two things; firstly, that aggression does not help to convince people of your point and secondly that uprising does not have a direct result.

In her book Practivism she gives numerous beautiful examples of people that changed the world through revolt. But Practivism is above all a practical guide to all kinds of ways to revolt. You do not have to chain yourself to a crane to be an activist, everyone can be an activist, everyone can do something. Her advice; do it together, organize it thoroughly and above all, no matter how heavy the subject is, convey the message with humor!!

When we asked her about her biggest fear, she reacts with “moth!”. (yes we understand that … !!) But also right after that; the power of the big corporations. They can do anything is seems, bend politicians to their will and think of companies like Shell, Monsanto.

The obsession with growth and profit is all-decisive. We think we are free, but live under a dictatorship that we maintain ourselves: we have been deluded by companies and governments into thinking that consuming is the highest good. Almost every action is focused on consuming … and often we do not realize this! It has become a religion.

We are threatened by pollution and overpopulation. “We live – at least in the West – as if the earth will never be exhausted … but it will just end one day!” Sometimes she thinks, let it collapse, maybe people will then take their responsibility.

These are topics that touch her to the bone. On the question of how we can change that, she replies; by daring to think critically, to hold responsible parties responsible and by creating new structures ourselves. By just doing it differently. For example, by setting up new ways of selling, like producing only on order as we (EG) do. With this you create a whole new world yourself.

Our conclusion: If you admit everything and realize how far we have gone already, it is almost unbearable. You can easily become depressed and discouraged. But after reading Practivism you just want to take action! It inspires, stimulates and shows us and hopefully many others that we can achieve more than we think! #youcanchangethewayitis (Unfortunately the book is only available in Dutch)

Eva wears the Two Way dress of BOOK02/Chapter01. A dress she fell in love with immediately. And it fits perfectly with our story:
‘Our inspiration is today’s duality in society. We see that people have opinions about everything. On social media in particular it’s easy to be blunt and drop any over-simplified opinion anonymously. A lot of these arguments are hardly founded and usually based on fear or influenced by the media. However, nothing is as black and white as it seems and everything is connected. We need to see the white. And vice versa. ‘

Check out our other stories